A survey by the ING showed that on average people spend more time choosing a new TV than they do a new home.
This may come as a surprise seeing as for most people, buying a home is the most expensive purchase they will ever make.
Getting a survey from an RICS Chartered Surveyor will help highlight any problems that could lead to expensive surprises later.
An RICS Home Survey will give you:
§  Peace of mind – You’ll know what you’re getting into before you make possibly the biggest purchase of your life
§  A leverage tool to negotiate on price if problems are found
§  Satisfaction that you’re paying a fair price for the property
Don’t make a move without an RICS Survey.
RICS HomeBuyer Report
Our RICS HomeBuyer Report gives you all of the above, plus separate market valuation and insurance reinstatement costs and advice on defects that may affect the value of the property, with repairs and ongoing maintenance advice.
Building Survey
The Building Survey gives you a comprehensive structural report including defects, repair and maintenance options. Essential for larger or older properties or if you’re planning major works.

Posted by Great Western Surveys at 00:56 No comments:

Why you should commission your own survey

The first point to remember is that the purpose of the report commissioned by your bank (the lender) is to advise them of the value of the property and any characteristics of the property (including significant defects) which might affect its value as security for the proposed loan. It is not a survey.

This should not be confused with a proper survey. The report is very much a pro-forma in style and is usually only two to three pages in length. So as a buyer you will be unwise to rely solely on the contents of this report. Instead we recommend you commission a Homebuyers Survey and Valuation Report or a full Building Survey for yourself.
Your house purchase is likely to be the biggest single personal investment of your life and not to have it properly checked out before you exchange is a false economy.

‘Rising dampness’ is a phrase that many buyers and building owners dread to hear. It conjures up images of a damp, dilapidated property that will be expensive to repair and difficult to sell. Yet many homes with a dampness problem fall far short of this dramatic description. In the majority of cases, the problems are caused by relatively minor faults. Despite this, every year tens of thousands of dwellings undergo expensive repair work to cure a problem that an increasing number of experts say is not that serious.
What is ‘rising dampness’?
Water in the ground rises up through the bricks and mortar of a wall by a process called ‘capillary action’. If the wall does not include a horizontal water proof layer (called a damp proof course), this rising moisture will eventually affect the internal parts of the home. In the worst cases, it will ruin decorations, cause the plaster to crumble and adjacent timber surfaces to rot. On the inside, it can look like the base of the wall is stained with a ‘tide mark’ that has white furry salt crystals along its edge.
Does rising dampness exist?
Although capillary action does occur, it is unlikely to result in dampness reaching these levels on its own. Instead, the dampness is often ‘helped’ along its journey by other faults including high ground
levels, leaking drains and gutters, and inappropriate wall finishes that stop the wall drying out (for example, cement render). Repairing these problems will often solve the dampness.
Posted by Great Western Surveys at 08:24 No comments:

Why a survey is more important now than ever.......

With uncertainty remaining in the property market at the start of 2012 it is even more important to ensure that, if you are buying a property, you have it properly surveyed so that any problems which might affect value and, importantly, re-saleability can be identified. By commissioning either a Homebuyers or Building Survey you will be in a much stronger position to identify any important problems and re-negotiate your purchase price.
Posted by Great Western Surveys at 07:53 No comments: 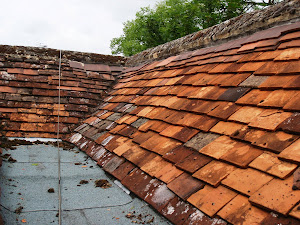 All roofs must be checked